Claritus / Blockchain  / What is an Ethereum Virtual Machine in Blockchain? 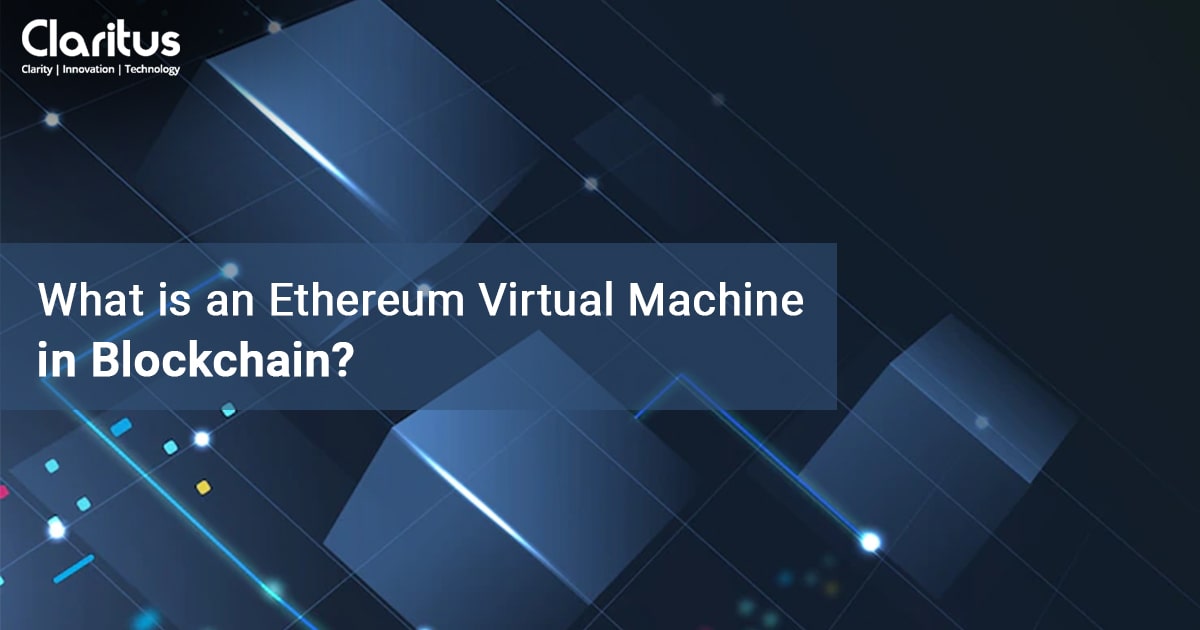 What is an Ethereum Virtual Machine in Blockchain?

The Ethereum virtual machine (EVM) is a software platform, a virtual computer in other words, which is used by programmers for building decentralized applications (dApps). It’s also utilized to execute and bring into play smart contracts on the Ethereum blockchain. Many a time, it’s referred to as the heart of Ethereum, because it works just like the heart of the human body, which delivers oxygen and the required nutrients for it. In this case, the EVM enables the programmers to build smart contracts and dApps in Solidity, the object-oriented programming language. The Ethereum network was conceptualized in 2013, by Vitalik Buterin, a programmer, and the EVM was designed by Gavin Wood, the co-founder. Using the LLVM Project compiler and written in C++ language, it’s a special state machine that operates continuously and has immutable operations.

The fuel that powers the EVM is known as Gas. Whether EVM crypto is being transferred or an investment to be done in an NFT, Gas is needed for payment related to the operation.

1. It’s a computer, which is just like bitcoin, and stores data on the blockchain. However, it also puts into effect the code in smart contracts on the Ethereum network.
2. It was created to act as a world computer with enormous capabilities and power.
3. The machine has the capability to run any type of crypto contract that can be created on Ethereum’s blockchain. It achieves this by using the language Solidity. The language is compiled into the EVM for execution.
4. It’s a software operating system or environment, and a processing engine that functions like a decentralized computer. It encompasses DeFi, EVM crypto apps, games, and even the marketplace and largest NFT trading platform like OpenSea, allowing programmers to use the Ethereum virtual machine for building apps centered on Ethereum and its EVM conformable language Solidity.
5. The idea behind writing code on the network is to build a program or a smart contract that executes on its own when certain criteria are satisfied, otherwise, the system can activate its “Exit” function too. Therefore, for instance, a hacker can’t embezzle money from it, since he or she may not have the authority or budget for doing it.

1. Untrusted code can be executed without risking data. EVM computations do not interfere with personal files or any other operation of the system.
2. Complex smart contracts can be run. They don’t disrupt each other. They can be written once and then run-on multiple platforms and computing environments.
3. Distributed consensus is permitted. Here, each one is running the same program from one’s own personal computer.
4. It tries to prevent failure vigorously and powerfully. This is a complicated process, since the network may be required to come to an agreement by the participants at any moment. So, the system is sturdy against individual node failure. Also, multiple nodes can be updated simultaneously without the concern of disagreements among them despite how the code is written.

1. The cost of storing data is very high. Both Gas and storing data on the blockchain are expensive.
2. Network congestion raises the price of Gas, even more, when a lot of transactions are pushed onto the blockchain since only a few of them can be permitted to go through. All the while, the computational power remains constant.
3. Technical expertise is necessary. It’s a Turing complete system, which permits the scripts to be written in any language. This could be ruinous or destructive depending on the programmer as well as the user’s intention and motive. With humongous power at his disposal, the code writer should be a responsible person to avoid disaster.

EVM has given birth to a parallel economy for sure. Notwithstanding this fact, it encounters obstacles and adversities which make it less than perfect. However, Ethereum 2.0 is in the offing, where speed, Gas price, and complexity of transactions will undergo a sea change and extensive upscaling.